Interview with Mr. Said Asadi the CEO of the Davin UAS Company.
“We are expanding our UAS activities in the field of Oil and Gas industry”. 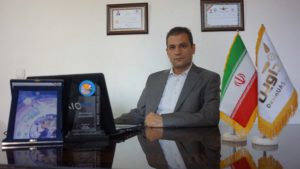 .Tell us about yourself and Davin UAS Company

I have studied in Oslo Akershus University College in Norway and later attended the Technical University of Delft in the Netherlands in the field of Computer Science and Media and Knowledge Technology. I established Davin UAS in 2013 in order to adapt the innovative technology of commercial drones in industry. In 2016 Davin UAS became a member of the Iranian Aviation & Space Industries Association (IASIA). Even though our company is still young, we have accomplished many industrial projects in which many of them are exceptional in the world.

?What services are offered by Davin UAS
Our company is capable of offering any service carried out by commercial UAS. The possibilities are unlimited. We have focused mainly on industrial aspects of drones, namely remote sensing in Oil and Gas Industry, Power Lines Inspection, Mining, Precision Agriculture, Highways and Rail Line Inspection, Environmental Surveillance, Aerial Surveying of villages and small cities, Crisis Management and so on

.Please explain more about some of activities you mentioned
Iran is amongst the top oil producer countries in the world. Hence this is naturally the first platform where commercial drones would serve most in Iran. UAS would assist us to routinely build a 3D model of structures in refineries. Later we analyze 3D models to look for any kind of damage or amortization to be reported to the maintenance department. Also rapid online inspection of petrochemical devices in refineries and leak detection of pipelines are possible though attaching thermal and infrared sensors to the drone
.By using UAS in oil and gas industry we can increase safety by increasing routine monitoring of structures

In precision agriculture we have had some cooperation with Iranian Institute of Agriculture. By applying visual and multispectral sensors to the drone, we can examine and analyze the health of the soil and plants. We fly the drone over farms and take Near Infrared and Visible photos in predefined distances. By processing images we produce NDVI maps, from which we can perform several analyses as: Nitrogen measurements, Plants Classification, Plant counting, biomass estimation and so on. Plant counting is indeed a difficult and time consuming task if not assisted by drones, especially in vast palm groves in South West Iran

In mining industry we cooperate with Arcamap (an Iranian company specialized in GIS and mining industry). We use UAS and photogrammetry technology to provide topographical maps and 3D models to be used for exploration, volumetric calculation and surveillance of mining process

Aerial surveying of villages and cities in Iran have been one of our main businesses after entering the UAS industry. The population in villages and cities in Iran increases rapidly. Also migration within the country from villages to small and big cities is a common practice. Urban changes are fast and in some cases out of control. Some people build their houses in suburbs of cities before granting the authorization from the municipality. This makes the task of mapping and managing urban development very difficult. We have extensively used drones to produce up to date cadastral and topographical maps of villages and cities. Having an up to date map from urban areas is also very useful in crisis management. Even though we have lots of experience in this field, we are still in early stages and we have faced many technical and non-technical issues. Flying over villages and cities requires much more attention to the safety and security measurements. We are constantly studying and researching to decrease the risk and also seeking cooperation from domestic and foreign companies to produce more reliable and safer drones especially designed for the purpose of aerial survey of cities and villages

One of our toughest projects was to produce the cadastral map of the Konark city. The city is located in Sistan and Balouchestan province, South East of Iran. The housing development of the city is unusually dense and disordered for some reason. I can assure terrestrial mapping in this city would be a very difficult task or rather close to impassible. Hence we used UAS and the output was incredibly efficient and amazing

?What is your vision for the future of commercial drones
Well, commercial drones are developing and getting more and more sophisticated as we speak. Sometimes I cannot follow how fast new devices and functionalities are produced to be added to commercial drones. I know future drones would be much smarter and need less human engagement to complete much more complex tasks. What I wish is to see more employers who realize the benefit of applying drones in industrial business. Furthermore I appreciate expanded education of cultural and safety aspects of using commercial drones